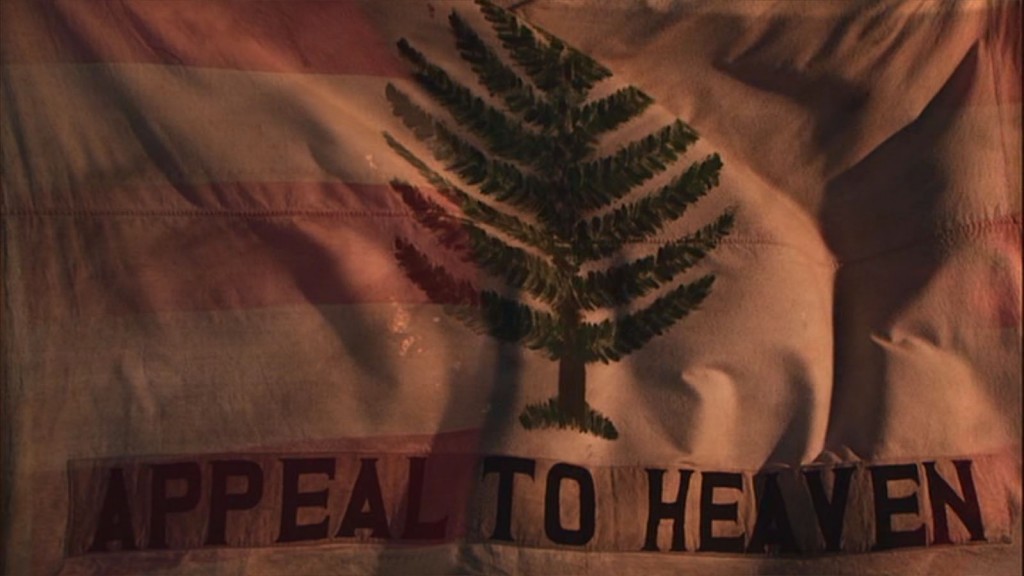 That same month, General George Washington, with the help of merchant and ship owner Colonel John Glover of Marblehead, Massachusetts, chartered and outfitted several ships to interrupt the British supplies.

John Glover and his Marblehead fisherman saved the day by evacuating Washington and the Continental Army across the East River to Manhattan Island after Battle of Brooklyn Heights, August 27, 1776.

Glover’s large Durham boats also ferried Washington and the Continental Army across the ice packed Delaware River for the surprise attack on the German Hessian troops at Trenton, December 26, 1776.

In October of 1775, the Continental Congress commissioned six vessels: the 24-gun frigates Alfred and Columbus, the 14 gun brigs Andrew Doria and Cabot, and the schooners Hornet, Wasp, and Fly.

Also four captains and five first lieutenants were commissioned, one of whom was future naval hero John Paul Jones.

“…flag with a white ground and a tree in the middle, the motto AN APPEAL TO HEAVEN.”

The Pine Tree Flag was also flown in towns, churches, riverbanks, and at the nation’s capital in Philadelphia.

Eastern White Pine Trees grew to a height of over 150 feet and were ideal for use as masts on British ships, contributing to the British navy being the most powerful navy in the world.

When the King sent agents to enforce his claim to every tree in New England over 12 inches in diameter, a Pine Tree Riot took place in 1772.

The Pine Tree Flag’s phrase, “An Appeal to Heaven,” was first used by John Locke in his Second Treatise on Civil Government, 1690, regarding the right of citizens who have been denied justice to go above the king’s head:

“Where the body of the people … is deprived of their right … and have no appeal on earth, then they have a liberty to appeal to heaven … Where there lies no appeal on earth … they have just cause to make their appeal to heaven … Where there is no judicature (justice) on earth, to decide controversies amongst men, God in heaven is judge. He alone, it is true, is judge of the right … So in this … he should appeal to the Supreme Judge.”

“An appeal to arms and to the God of hosts is all that is left us! … We shall not fight our battles alone. There is a just God who presides over the destinies of nations.”

“Appealing to Heaven for the justice of our cause, we determine to die or be free.”

The Massachusetts Navy flew a similar Liberty Tree Flag, with the line “An Appeal to God.”

The Declaration of Causes and Necessity for Taking Up Arms, July 6, 1775, stated:

“We most solemnly, before God and the world … resolved to die freemen rather than to live slaves …With an humble confidence in the mercies of the Supreme and Impartial Judge and Ruler of the Universe.”

The Declaration of Independence, July 4, 1776, stated:

“We, therefore … appealing to the Supreme Judge of the world for the rectitude of our intentions, do … declare, That these United Colonies are, and of Right ought to be Free and Independent States.”

America’s first navy grew to over 40 vessels, but was disbanded after the Revolutionary War. The Massachusetts Navy continued, and was later incorporated into the U.S. Navy.

On AUGUST 4, 1790, the Revenue Marine, later called Revenue Cutter Service, was created by the recommendation of Alexander Hamilton, the Secretary of the Treasury.

It consisted of 10 ships charged with stopping smuggling and French privateers from operating in American waters.

The Revenue-Marine was the only armed maritime service of the United States till the Department of the Navy was created in 1798.

During the U.S.-French Quasi War of 1798-1801, eight Revenue Cutter vessels were among the 45 American ships that served in combat.

When the U.S. Government passed the Slave Trade Act of 1794, the Revenue-Marine began intercepting slave ships which were illegally bringing slaves into the country.

“We passed a slave woman shot or stabbed through the body and lying on the path … an Arab who passed early that morning had done it in anger at losing the price he had given for her, because she was unable to walk any longer.

The strangest disease I have seen in this country seems really to be broken heartedness, and it attacks free men who have been captured and made slaves.”

David Livingstone estimated that each year over 80,000 Africans died before reaching the Muslim slave markets, writing to the editor of the New York Herald:

“If my disclosures regarding the terrible Ujijian slavery should lead to the suppression of the East Coast slave trade, I shall regard that as a greater matter by far than the discovery of all the Nile sources together.”

On January 1, 1808, exactly 55 years before Republican President Abraham Lincoln issued the Emancipation Proclamation,Congress closed all U.S. ports to the importation of slaves.

In 1915, the U.S. Revenue Cutter Service was merged with the U.S. Lifesaving Service to form the U.S. Coast Guard.

The original anthem of the U.S. Coast Guard was:

“To sink the foe or save the maimed,
Our mission and our pride,
We’ll carry on ’til Kingdom Come,
Ideals for which we’ve died.”

In 1939, the U.S. Lighthouse Service was merged into the U.S. Coast Guard, as was the Steamboat Inspection Service and Bureau of Navigation in 1946.

In 1967, the U.S. Coast Guard was transferred to the Department of Transportation.

“This is a very ancient service in our country’s history.

Its first father … Alexander Hamilton, began the Coast Guard as a revenue collecting service, asked the Congress of the United States for appropriations for 10 vessels…

…The first Eagle was one of our most distinguished warships, and in actions against privateers of France, captured over five vessels, and recaptured seven American vessels…”

“This is the oldest continuous seagoing service in the United States, stretching back to the beginning of our country.”

“A further proposal…is the definite expansion of the Coast Guard…in the matter of border patrol.”

Included in the list of casualties at the WWII Battle of Okinawa, President Truman stated, June 1, 1945:

That, my young friends, is what makes this country great.”

“You serve our country in peacetime, on ice patrols and weather patrols, in protecting the standards of the merchant marine, in protecting safety at sea … and in time of war you, with the American Navy, as you did in World War II and at the time of Korea.”

“Winston Churchill once said: ‘Civilization will not last, freedom will not survive, peace will not be kept, unless mankind unites together to defend them and show themselves possessed of a power before which barbaric forces will stand in awe’…

It is stronger than the combined might of all the nations in the history of the world. And I confidently predict that strength will continue to grow…”

“No one can live daily, as I must do, with the dark realities of nuclear ruin, without seeking the guidance of God to find the path of peace.

“It’s our prayer to serve America in peace. It’s our commitment to defend her in war.”